With all of the consciousness arising around the notion of cultural ownership these days, I would be remiss if I didn’t make a commentary on my work regarding the topic. I am not a fan of cultural appropriation and I am sensitive to when I or others may be participating in it. I also think it is a topic of complexity and requires an ever-increasing maturity to address its gradual unfolding. That is if what we want is a positive change and not just the intensification of identity polarization.

While I addressed this briefly in the book that accompanies the deck, space limitations kept me from going into details. This article aims at going a bit deeper than print publishing restrictions allowed.

To be clear of where I stand on cultural appropriation, let me say I think everyone is free to do what they want in the privacy of their own home (only with total consent and no harm brought to the ecosystem, of course). If you want to adopt cultural activities that are alien to your own upbringing and keep it private, more power to you. Explore your bad self. When we make it public, when we claim to represent, and especially when we charge for it, it becomes problematic.

Bold misbehaviors aside, which are pretty easy to discern, there is also a less clear, gray area where portions of cultural ideas are borrowed and integrated into other works by people outside of the originating culture. As a general rule, if this is done with honesty, giving credit where it is due and is done so as to not intentionally misrepresent the original nor claim knowledge or authority one does not have, it is a good thing. It is akin to the idea of fair use within the realms of quoting passages from books. You cannot simply publish someone else’s words nor claim them as your own, but you can reference bits of them to help bring to light your own words. This is a beautiful form of co-creation, in my opinion, and a way that the interwoven play of life reveals and perpetuates itself.

The Wild Harmonic Oracle arises from my attempt to understand the human experience and communicate a variety of ways of talking about it without making specific cultural or traditional references. Of course, I succeeded in some places and failed in others. Much of the deck draws upon universal images of nature, geometry and trans-cultural objects like swords and bodies. Yet, in other places, some cultural symbols, ones that were so influential in my psyche at the time, insisted on being in the cards. For the most part, I think their inclusion will go unnoticed, being so worked into the art that they do not stand out. But some do stand out, at least to me, and to these, I would like to speak now.

Perhaps one of the most problematic cards in the deck, at least in my sense of this context, is the card Tantric Trust. It not only uses the word “tantric,” which comes from cultures not my own but also features a symbol resembling an Egyptian Ankh. If any card strikes me as being naively referencing cultural ideas with the reckless entitlement of a white male American high on his own gnosis, it is this one.

The reason I allowed it to pass is in part because, in my experience, both the word tantric and the symbol of the Ankh have taken on pervasive modern meanings to virtually everyone I have ever discussed spirituality with. Misguided as the process has been, these two symbols have somehow become almost mainstream placeholders for extremely powerful ideas. Having them at my disposal in a reading, in a communication, was too useful to pass up.

The other aspect of why this card got a pass is that the card itself represents pushing my own limits. It felt right to allow a piece of art that I felt was edgy (even if others never do, lol) to represent the inquiry into the edgy sides of life. I allowed the poison inherent in the art to be present to see if it could help facilitate the transmutation which its place in the deck represented. We shall see.

Two other instances of symbols I think might stand out are the Yin Yang symbol in Negation Trance and the strange, vajra-like object in Talismanic Access. In both cases, they are not the traditional versions of the images but merely based on them. As with Tantric Trust, I feel that the root images lend their mainstream, western-version concepts to what I then have done with them in order to make my points (enigmatic as they may be!). In the instance of Talismanic Access, I explored so many other non-vajra versions, and none of them fit with the deck. So it is either a case of the mystical insistence by the spirits behind the cards or the naive inclusion of this symbolism by a lazy artist who can’t be bothered to do better—also, publishing deadlines.

A perhaps garish use of another cultural symbol is the Sri Yantra on Infinite Expressions. I suppose to me this symbol has become so present in my world, via the propagation of western Yoga culture, that I subconsciously thought it would go unnoticed, just as the chakra banner on the back of your accountant’s door doesn’t seem out of place any longer. This symbol has been so vital for me in my journey, it simply had to be in this deck. I don’t think I have an excuse for it other than it is again a shorthand for a wide-ranging set of ideas for which I could not find a better way to portray. Or lazy. Or publishing deadlines.

The rest of the deck is peppered with images of meditators, which I feel are universal, and various knot patterns, which I draw from my Celtic Ancestors, and so don’t cost me any sleep at their inclusions.

There is one instance, however, where I straight-up took someone else’s idea. This is on the card Self Creating and it is a blatant rip-off of Escher’s hand drawing a hand drawing a hand. It baffles me that I can think of no better symbol for this card to this day, and in a way, I think I consider Escher’s drawing a cultural symbol rather than one person’s unique expression. This is, of course, not true and unfair of me to try and justify this bold departure from originality, and no amount of clever narration could ever convince you that Escher came to me in a dream and told me I had his blessing to use it.

Of course, the irony of using someone else’s idea on a card called “Self Creating” is something I couldn’t remove from the deck. Perhaps it is my sense of humor, but it seems appropriate to use this act of irony to illustrate such a bafflingly ironic concept as creating oneself. 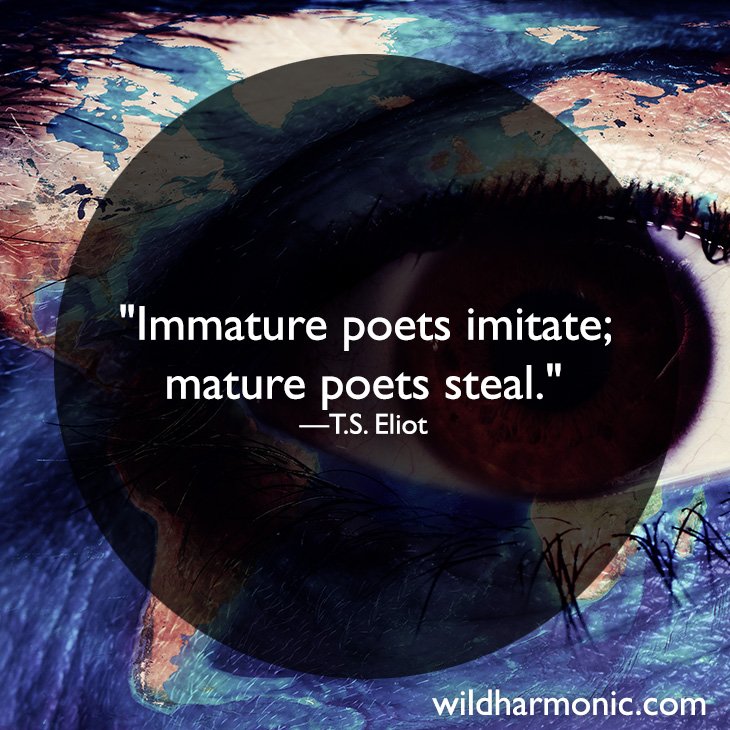